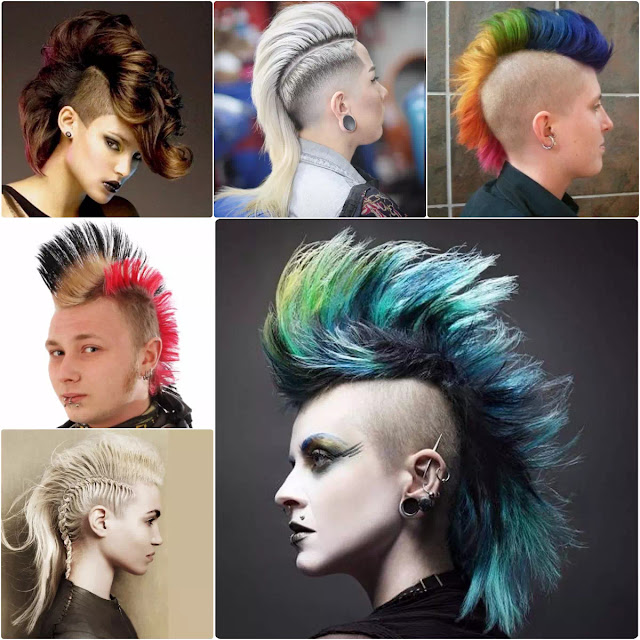 The Mohawk, or the Mohican as it is also called, is an easy maintenance hairstyle. In contemporary times, this hairstyle is considered to be a bold statement that the adventurous opt for. However, it has seen its fair share of colorful history. Read ahead to find out more.

What is a Mohawk Hairstyle?

A Mohawk simply involves a head full of hair in the center ad shaven symmetrically on the sides. It is said to have been historically worn by the Iroquois people who plucked out excess hair. For this reason, it is also often referred to as the Iro. On the Irish, this hairstyle can be dated as far back as 392 BCE to 201 BCE.
Popularly, the name of this hairstyle comes from the Mohawk people of Southern America. This culture and the hairstyle was popularized by Henry Fonda in the movie Drums Along the Mohawk, released in 1939. Since then, the Mohawk hairstyle has been seen everywhere.
It is also interesting to note that the modern Mohawk hairstyle is closest to the traditional hair worn by the tribe Pawnee. Hence, Mohawk has multiple cultural bearings across nations and traditions. Here are the various modern Mohawks you should know about

Despite its traditional bearings, the Mohawk was used as a symbol of the rebellious youth culture that established itself in the 1970s. It was backed by an ideology of free-spirited youth that did not want to fit into society’s traditional norms.
In protest, they shaved off the sides of their head and cultivated an extra-long mane at the center to give rise to the modern Mohawk.

With the counter-culture that popularized the long Mohawk came the fiery colored locks. This style is rebellious and was largely adopted by teenagers who displayed their angst and subscribed to Punk culture.
Pink was a popular color in this Mohawk, and teenagers often coupled it with tattoos. The hair was initially kept long. Lately, this Mohawk hairstyle has been tamed to keep the central mane short and groomed. Color is added more for impact than rebellion.

What is Modern Mohawk?

The Mohawk now no longer remains in the domain of the rebellious. When sported by men today, it is simply a mark of a modern, confident man. It is also worn by women.
Men can find sophisticated Mohawks that pair well with even the most classic styles of dressing. With regular upkeep, grooming, and a few products, this hairstyle can exude the right amount of confidence.
It can be confusing to pick the right Mohawk. Here’s what to ask the hairstylist when opting for a Mohawk hairstyle.

Length of the Hair on Top

This is one of the main factors that will guide you to a great Mohawk. How long should the central mane be? Do you want it short so that maintenance is easy? Would you like it medium for bouncy hair?
Is a long central mane that can be tied into a bun the right option for you? Think these through and discuss them with the stylist. A cropped central mane is easy to maintain. A longer one is harder to care for but can be the ultimate statement.

Length of the Hair on the Sides

Do you want to shave your hair on the sides or keep a little fuzz? This is another important factor to discuss with the hairstylist. Completely shaved sides make a larger impact and can make you stand out in a crowd.
If you have never experimented with your hair before, you can first begin by cropping the sides of your head to only just reveal the hair. This hairstyle closely resembles a Fauxhawk and can be your initiation into fully-shaved sides.
If you like what you see, you can go ahead and shave the sides completely.

A Mohawk hairstyle will let you make just the right kind of statement. If cut well, it can help you exude confidence and minimize maintenance efforts. This can be a big step for many men, and browsing through the various style to pick one that suits your lifestyle is crucial.